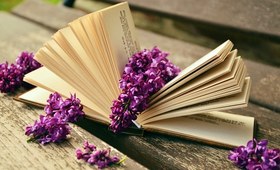 ​. . . from her perch above, Naina watched the milk-boy ride by on his Hero Honda motorcycle, his metal milk canisters barely missing a stray dog absorbed in devouring a small casualty strewn on the street below.   From a distance, from opposite ends of the colony, loudspeakers echoed the ritual morning prayers, both in Punjabi and in Hindi, as if in melodious harmony, sadly unachievable amongst some of their respective worshipers.  In the neighboring courtyard below, Naina watched in delight as Ramu meticulously stirred a savoury liquid concoction within a clay pot that partially concealed his pot belly.  Ramu carefully added spices, a pinch at a time, with his stained, callused fingers.  The aroma of ground cumin, coriander, tamarind and black salt powder drifted upwards, teasing Naina’s taste buds with the pani-puri he would sell later that day in the main bazaar, bustling with people and traffic.  Perhaps this evening she would have a chance to relish in some of Ramu’s delights if she were asked to accompany Memsaab’s daughter-in-law to the market.  Lost in thought, with her elbow resting on the veranda wall, Naina resisted the impulse to scream out as a small pebble shot past her.  Was it him?  Now standing alert, her eyes again searched the rooftop facing her own.

“Nainaaa, hurry up child, you’ll be late for Memsaab!” her mother shouted from the ground floor, as if sensing the sudden incident that had diverted her daughter’s attention.
​
“I’m coming, Mummy!” Naina retorted, reluctantly severing her gaze from the familiar handsome eyes that had just met hers from a distance.
​
Naina’s body tensed up with the realization that the boy had caught sight of her.  Even more disconcerting was the fact that this time, he had caught sight of her eyes searching for his.  Impulsively, she turned her back towards him, positioning herself to descend the stairs.  If only there was time to build up the courage to face him.
​

Camille read the name tags of each flight attendant as she boarded Flight 275 from San Francisco heading to London England. She focused on a young bouncy brunette named Candace, with the toothy smile, who looked like she couldn’t save anyone in an emergency. How old is she anyway? Eighteen?

Things were not off to a good start. It was bad enough that the flight left late at night, but to be locked into a big metal flying machine for over ten hours would be pure punishment. Walking slowly down the aisles, her eyes skirted from side to side searching for seat 26C. Once found, she struggled to shove her carry-on bag into the overhead compartment.
​
“Let me help you with that.” The offer came from a smooth sounding, insistent male voice. Camille turned to the side to see where the voice came from.

A flash of perfectly aligned white teeth within a wide smile greeted her. “Oh sure, that would be great thanks,” she replied while easing into her allocated seat.

She fixed her gaze upon his snug fitting white polo shirt and relaxed fit blue jeans. She watched him secure her bag in the overhead compartment, then immediately put his in afterward.

He slid into the seat across the aisle from her. She flashed a thankful smile as he gave her a nod. Not bad looking she thought, though she was hardly in the mood for socializing with anybody. It had been a long day and she was starting to feel a hint of pressure behind her left eye, often indicating the onset of a headache.
​
Within what seemed to be minutes of her clearing her thoughts and tightening her seat belt, the cabin door slammed shut and her nerves started to tingle. She was grateful to a friend who had told her about taking Gravol before the flight to help with her stomach. She rummaged through her purse to make sure that the pink and white package was still there to be used later on if needed. She grazed her index finger over the package for support. ​

Walking Through - Francine Fleming
​
“That’s my song.” The voice that reached my ear materialized from seemingly out of nowhere.
I looked around for its owner and saw an elderly lady seated in an armchair to the right of mine. Fine wrinkles etched her cocoa complexioned skin, though youthful beauty still shone through her aged face.  High cheekbones reached up to brown eyes that bore the hint of a slant and her silver-grey hair was swept up in a neat bun. Passing time had not ravaged her features. I continued staring at her, not certain as to whether she was speaking to me or just speaking.

“Pardon me?” I asked when she spoke again.

The velvety voice that flowed through the visitors’ lounge of Forest Brook Retirement and Assisted Living Residences came from a portable CD player that stood on a side table next to her chair. I cocked my head to one side while listening to the singer. Her voice was like Billie Holiday’s - rich and bluesy. I returned my gaze toward the lady who was quietly singing the soulful melody, “…walking through, gonna walk on, walk on through…”

She opened her eyes and her gaze met mine. A smile spread across her face. “Yeah, that’s me singing. Recorded that tune back in ’66.”

“It’s beautiful. I’m Megan, by the way. Megan Craig,” I said offering her my hand. She took my hand in hers. Her touch was soft and warm.

“My name’s Dahlia,” she said. “Born and raised in Harlem, New York. How ‘bout you, honey? Where you from?”

“I’m from Brooklyn. Born and raised there.”

“Brooklyn? For real? That’s where I lived before I moved out here to the country.”
​
I smiled. Forest Brook, nestled among a copse of mature oak trees, was located only an hour’s drive outside of Brooklyn, not quite in the country but for urban dwellers it might as well have been. I looked out the large west facing windows at the surrounding trees dressed in their spring finery, their budding leaves illuminated by the setting sun.

A December To Remember - Maria Jemmott

He started to play and Tricia instantly recognized the song, but did not anticipate what came next. Looking straight into her face, his rich mellow voice tugged at the strings of her heart as the caressing lyrics of the song flowed from his lips.

Carlos motioned for her to join him on the bench. She did, but remained silent, as he raised one hand from the piano and ran it along her left cheek, wiping the teardrop that had rested there.

Her heart spoke. “How can I tell him that he’s everything I’ve dreamed of, and everything I need? Help me Jesus!”
​
They were both smiling as Carlos started a new melody. They sang together, love song, after love song. After a few songs, Carlos turned his face to her and said, “This last one is for you and very fitting.” He sang, “You’re once, twice, three times a lady and I love you, I love you”

At the end of the song, he kissed her on her cheeks, and used his hands once more to wipe away her tears.

"Thank you Carlos, I really enjoyed this."

"I did too. It was great having someone to play for again."
​
They returned to the sectional. She snuggled close to him and rested her head on his big strong shoulder. She ran her fingers along his face, enjoying the softness of his smooth olive complexion. She closed her eyes, and smiled.

Suzette put down her teacup and frowned.  She hadn’t discussed Wolf Point with anyone in over twenty years.

The Northern Medicine people had showed her some grainy black and white photographs of a barren patch of tundra, hemmed in by rocky outcrops on one side and the bank of a placid river on the other.

The interview came with an offer to fly her up there for a photo op, but she had panicked and lied to the Northern Medicine people that she was afraid of flying.  For many months after that, Wolf Point had been for her the elephant in every room.

Suzette’s heart raced and her lungs felt heavy as lead. Her hands were shaking so badly, she dared not raise the teacup to her lips. The flu pandemic of 1918 had scraped the people of Wolf Point from the earth, leaving her no roots to claim as her own.  She was part of no tapestry, no family tree, and no circle of loved ones.  Strauss was silent for a moment and Suzette detected a subtle movement of his eyes that seemed to acknowledge her discomfort.

After a few beats passed, he drew in a deep breath and said, "With your permission, I’d like to exhume the remains of a young woman, named Anaaya.”

He emphasized the name as if Suzette might recognize it. She had never learned the names of any of the Wolf Point settlement people, not even her birth mother’s.  Suzette stared at her hands.